A while back, someone over at Portland Transport jumped through the mired swamp that is TriMet’s public records request process and came out with an extremely detailed schematic of the existing and planned MAX alignment. Sample pages below:

It’s a very thorough document that has grade/elevation/direction changes, speeds, etc (though for the person who is looking for the deepest part of the tunnel, it appears to only give elevation above sea level, not depth below the surface, and paradoxically Washington Park is the deepest underground platform and yet appears to have the highest elevation above sea level of all the platforms). This is not exactly light bathroom reading, but it’s an interesting reference for the transit wonks out there.

Anyway, have at it, folks. It’s a PDF, about 2.5 MB, and since it had already been released into the public, I figure it’s fair to repost it, especially if it saves someone money by not having to request it from TriMet again for when you just need to know how far apart the Old Town Chinatown and Rose Quarter platforms are (2700′, for the curious).

In with the new, disregard the old

Due to popular demand, here are more construction photos showing the work being done at the Jackson turnaround and the facility expansion at Ruby Junction.

First, the work being done by Ruby:

And Jackson, where Orange Line trains will continue to Milwaukie:

And while it’s great and all to see the work for the Orange Line coming along, I can’t help but wish the same focus was put on maintaining the existing alignment. Remember that big to-do this past March? Long story short, frontline workers had been trying to address long-standing safety issues at TriMet, including damage to the alignment that had gone unrepaired for months (example – the switches just west of the Lloyd Center platform, pictured here in July of 2012 and again in January 2013 with no repairs made). Nothing was being done internally, so the union brought it to the media, which then led to ODOT announcing an inspection. Cue a flurry of activity at TriMet which largely consisted of throwing asphalt on everything to patch the alignment up before the inspection (here are the same switches in mid-March 2013). As a result, the ODOT report didn’t find any major safety concerns. TriMet claimed this as a victory and accused the union of making up safety issues to draw attention away from the negotiations. Though really, it’s a dubious victory if you have to do a bunch of last minute work right before an inspection to fix problems that had been around for months – doesn’t that just mean the union was right?

But, see, asphalt doesn’t last forever, especially if the underlying problems weren’t actually fixed (as a MOW commenter said, that kind of damage could be due to broken rail near the heel block of the switch, or waterlogged rotted ties underneath, neither of which are fixed by a fresh coat of asphalt). Check this audio from June 2013 about the same switches west of Lloyd Center, and here’s how that area looks as of this month. In other words, no, it hasn’t been fixed yet.

Remember those yellow cones denote a slow order – that is, a reduction in speed through this area because going full speed through damaged track would be dangerous. So, as I said earlier, while it’s nice that the work for the Orange Line is coming along, I don’t think that’s really a valid reason to neglect maintenance on the existing alignment in the meantime. You know, safety being a value and all.

As I’d said back in September 2011 when construction for the Orange Line was about to begin on Lincoln Street, I wanted to get progress pics because it just hadn’t really occurred to me with other MAX extensions. But that hasn’t happened with any real regularity or with pictures taken in the same locations to show progress (such as the above picture, which I think is the only location I’ve gotten 4 times). So without much organization beyond when the photos were taken, here’s everything. All pictures can be clicked on for a larger size. 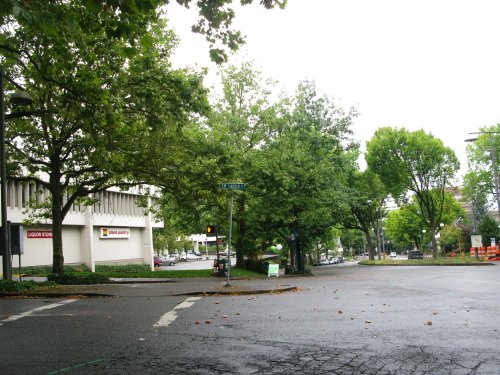 I’m not going to repost all of the oldest pictures from 2011 here since I’ve already gotten them in previous posts, but September 2011 showed Lincoln before construction began, when people in nearby apartments protested the clearcutting of all the trees in this block.

By early October 2011, all the trees in the median were cut down, as were most of the trees lining the street (eventually they would all be cut). 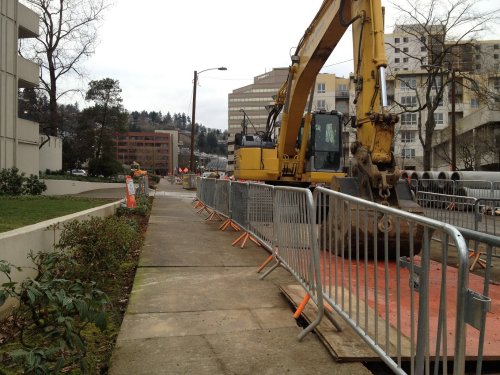 Several months after the previous set, now all the stumps are gone and the median is being removed.

Headed out there briefly, but saw limited pedestrian access and a lot of workers doing things, so I didn’t stick around.

It took me several months to get back over there again. I think the first rails started going in around November 2012. I also don’t know when these buildings at the eastern end of the street were demolished, I didn’t see any of that happening. Not sure what specifically those businesses had been, where they relocated, or if they just closed up without moving elsewhere.

Pic from Sep 2011, notice the building in the back

By January those buildings were demolished, the land cleared out, and rail was already laid down through here for the harbor structure.

Nothing yet shown about the vegetated track (linked picture is European I think, not TriMet)… that part is going to be limited to the platform area. I’m curious and somewhat pessimistic how that’s going to play out. Vegetation on rails makes for an extremely poor stopping surface since leaves are as bad as ice when it comes to traction, so with the vegetation for runoff between the rails plus TriMet saying they intend to replace the London Plane trees that had grown here, it sounds like there’s going to be a lot of leaf buildup in this area. I DID like seeing t-rail being used on Lincoln (see picture gallery below, the cross-section of the rails are T-shaped), embedded similar to the alignment on Interstate. Although leaf buildup on t-rail is still slippery, it’s better than girder rail where the debris can fill in the channel in the rails which can be extremely dangerous – not only is that slippery but that can cause a derailment or a loss of shunt where the leaves insulate the rail and the train won’t be detected in that circuit. 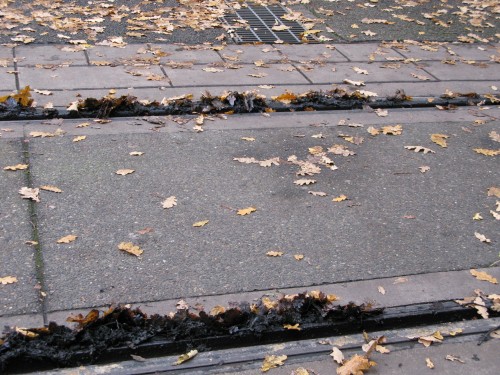 The rest of the January pictures:

Okay, this isn’t technically from Lincoln Street, but this picture was taken underneath the Harbor Structure that connects from Lincoln.

And the pictures from June, which show more of the rail installed than there had been in January.

Impact on other MAX lines

I know a lot of people have asked how the Orange Line will connect with existing lines. The new alignment starts at the southern end of the transit mall at the Jackson turnaround, currently used by the connected Yellow and Green lines – for those not familiar, Yellow Line trains become Green at PSU, and vice versa. The current word (though not yet set in stone) is that Green will then run by itself and Yellow and Orange will be run together. There are also talks of changing the Blue and Red lines, with Blue running west from Cleveland Ave in Gresham only as far as Beaverton TC (though with rush hour service to Hatfield Gov Center in Hillsboro), and running the Red Line from the airport to Hatfield, a change that might happen sooner than the scheduled 2015 opening of the Orange Line.

This post has nothing to do with TriMet. Sometimes that’s going to happen.

On Monday, a 30 year old female passenger at the Minami-Urawa Station fell as she was exiting a train and got stuck between the train and the platform. Station staff asked commuters to help, first moving everyone inside the train over to the opposite side (which didn’t work) and then getting about 40 people outside the train to push against it. This shifted the carriage of the train far enough that the workers had space to pull her out.

It’s a feel-good story all around – the woman wasn’t seriously injured, commuters showed a nice display of impromptu teamwork… And then there’s my favorite part: the total length of this delay? EIGHT MINUTES.

Posted in not TriMet

This is based on an internal document, but there’s nothing confidential about it and really anyone could work the numbers out if they wanted to. On top of that I think it’s interesting and yet another one of those “It’d be nice if the public saw this” topics, so we’re running with it.

Westbound on the Blue Line from Gresham

A full day’s shift on the Blue Line is two round trips. That means if you have a straight shift on the Blue Line, you’re going through 376 intersections, 248 pre-empts, 236 switches, 188 platforms, 136 ABS signals, 120 gated crossings, 56 Z-crossings, 28 combination signals, and 20 speed zones on a daily basis. And figure in maybe 7 or so train orders that change the rules.

Turn around and do it all again, eastbound on the Blue Line from Hillsboro

Annually, that pretty much means there are more than 305,440 opportunities per operator to make a mistake if they’re not attentive. This could be due to personal operator error (e.g. not seeing a signal properly or disregarding a train order) or not properly reacting/responding to problems in the alignment, such as signal failures, switch malfunctions, or gate arm malfunctions. And of course there are countless opportunities for the public to cause problems that operators need to be watchful for, such as trespassing, causing safety hazards on platforms, running in front of moving trains, or reaching legendary levels of dumb things to do with their cars. 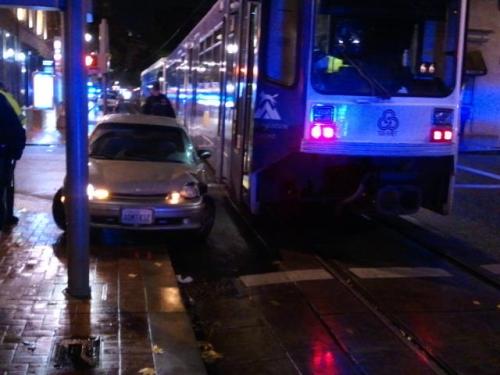 And if anything DOES go wrong, that can often bring in a whole slew of new train orders, reroutes, or sometimes even finding that you’re going to go for another trip when you were supposed to be getting relieved. So add in another set of those numbers for your extra work.

The original intent from TriMet with this was to remind operators to never become complacent or get distracted because of the potential for so many things can go wrong. Fair enough, because the moment you let your mind wander or run on autopilot is when things can and will go wrong. For example, you can’t assume that just because you have your pre-empt that no one will run the red light, or that someone won’t try to walk, bike, or drive around lowered crossing gate arms in front of you. A lot of the work in operating a train is compensating for safety hazards created by the public or the environment – you always have to be prepared for known hot spots and be ready to quickly react if you encounter an unexpected hazard.

The new head of rail training

At the same time, along with this great video piece on rail operation that KATU did last year, this nicely illustrates that if you think rail operators just sit there all day and that operating a train must be easy since there’s no steering involved (and to a similar extent, if you think that any idiot could be a good professional bus driver because just about everyone over the age of 18 knows how to drive), YOU ARE WRONG. No, you don’t need a college degree to do either of these jobs, but when you take into consideration the skill involved to drive a bus or operate a train safely with everything the world and the public throws at you (sometimes literally, especially if you’re a bus driver!), the work is far from “easy” and deserves respect – both from the public and from some of the TriMet muckymucks who often downplay and lose sight of the hard work that operators do.