From the archives: Westside construction

A while back I started taking PMLR/Orange Line progress pics (posted here and here with SW Lincoln, then I never got around to posting any others but here’s a recent one, quite a change from the tree-lined street it had been):

Looking east from the end of Lincoln

However, I also have a bunch of donated/archived pics of westside rail construction that I don’t think have been published elsewhere, at least not all of them, and I thought readers here might find them interesting:

MAX originally ran from Gresham to downtown, ending at 11th Avenue, which is the terminus just west of the Galleria and Library platforms.

Starred path showing where rail would extend beyond 11th Ave 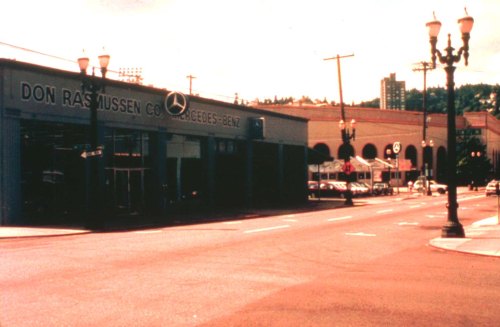 Willow Creek/185th, the original proposed end of the west side line

Willow Creek can function as the end of a line (and many Red Line trains will terminate there to go back into the yard), but then-mayor of Hillsboro Shirley Huffman was a very vocal advocate of extending the line further, which is why the Blue Line runs all the way out to Hillsboro. 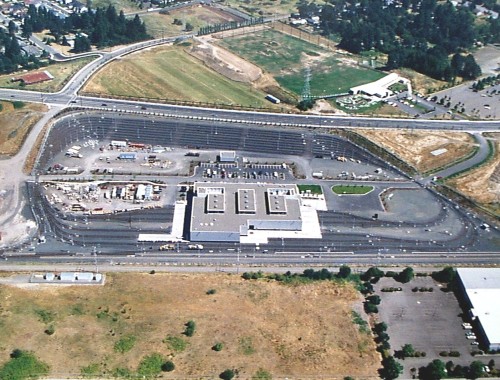 Elmonica Yard, 1995. The area around it has gotten more built up since then.

Construction of the Main Street Bridge (and how it looks now)

The most significant undertaking of the westside expansion was the tunnel. If you take the train to Washington Park (the only stop in the tunnel) and ride the elevator up, you’ll find yourself on the Les AuCoin Plaza. You’ll see a sort of cross-section of the bore with tunnel trivia engraved in one segment. For those of you not following me on Twitter, that’s where the 54,962 cups of coffee consumed by tunnel workers fact came from. For the record, they also wore out 1481 pairs of rubber boots.

This is what the 278-foot tunnel boring machine (affectionately nicknamed “Bore Regard”) looked like. Over the course of the project, the machine wore out 341 cutter discs, each weighing  400lbs, and it averaged through about 80 feet of rock per day, with one day setting a record for progressing through 181 feet of rock. The boring machine was used from the eastern side heading west for about 2 miles in. From the western side heading east for about a mile in, explosives were used. The two sides of the first bore (the one used primarily now for westbound trains) met around 16 months after construction began. The tunnel now used for eastbound trains was faster to complete, taking only about 4 months. At $184 million to build, the tunnels actually came in over budget (for the curious, the entire cost of the 18-mile westside expansion was $963.5 million).

One bore has been concrete-lined, the other is still in progress (126,100 cubic tons of concrete used altogether to line both bores)

West portal as it looks nowadays

Operator view going through the tunnel
(old pic, that cab radio is practically an antique)

Westside construction fun fact, especially for those of you who, like Dr. Jeff, would rather pretend that the tunnel part of your MAX commute doesn’t exist:  TriMet had to move 14 bodies in the cemetery above the tunnel during the tunnel construction project. Tell me I’m not the only person who thinks of this…

I love the tunnel.

Technically there are two tunnels: the eastbound bore and the westbound bore, though both are signalized for travel in both directions, making it one of the few areas of the alignment where that is possible (generally speaking, running reverse on the alignment – that is, east on the westbound track for example – is done at restricted speeds with full stops required at every switch in the tracks since you don’t have signal protection telling you that the way is clear of other trains or that your switches are set properly.  Where the rails are signalized in both directions, running reverse can be done at full speeds, but there are only a few areas of the alignment that are signalized for travel in both directions).

So to start, here’s a speedy look at the westbound bore of the tunnel:

Each bore is a little over 3 miles long, with the Washington Park platform closer to the eastern side.  Every 750 feet in the tunnel is a blue light, which is one of the few things visible to passengers inside trains, though if you watch for them on the left side of the train you can spot the ABS signals, too.  These blue lights indicate emergency phones and cross-passage doors which connect both bores.  There are 19 of these crosspassages in all. 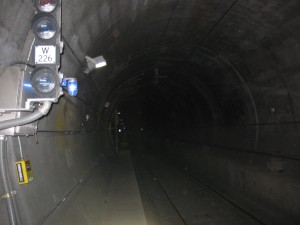 Old pic, accidentally used flash, but it shows the blue light/emergency phone setup (and also the motion detectors – do not attempt to walk through the tunnel!)

It’s a lot more obvious from the point of view of the cab than the passenger area, but there is an elevation change as you go through the tunnel, with the west being higher than the east.  Since the tunnel slopes towards downtown, the area preceding the eastern exit of both bores is speed tripped for speeds greater than 20mph, though the ATS magnets are only active for trains heading east.  Because of this, going west through the tunnel takes slightly less time than going east. If you look closely in the above video, you can see the ATS magnets at intervals soon after we enter the tunnel, but since we are climbing the hill heading west there, they’re not active. 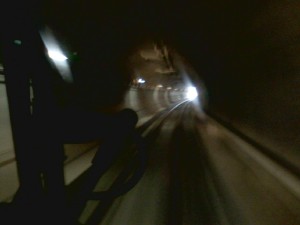 Approaching the west exit of the westbound bore

The Washington Park platform is the only underground platform in the system, located at a depth of 260 feet, making it the deepest subway station in North America and the third deepest in the world (after Kiev’s Arsenalna platform which is 335 feet and Moscow’s Park Pobedy platform which is 318 ft below the surface). Lining the platform on each side is a core sample taken during construction of the tunnel. 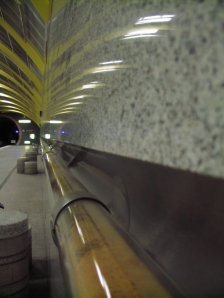 Looking down the core sample on the eastbound platform

The platforms, by the way, are color-coded. Anything associated with east is yellow for the rising sun – both the support beams of the eastbound platform and the bricks outlining the bore entrances on the eastern side of the platform. Similarly, anything associated with west is red for the setting sun – red support beams on the westbound platform and red brick on the bore entrances on the western side.

On both the eastbound and westbound sides are art displays that take a lot of inspiration from math and science. First, the core sample timeline: 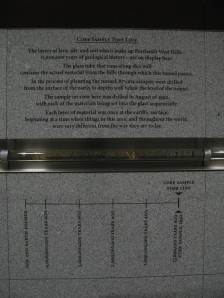 and assorted points of interest along the timeline: 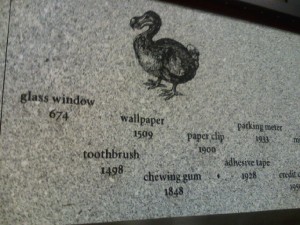 Just in case you were wondering where parking meters and tape fit into the geological scheme of things.

That is a long time ago.

Then there’s the math-inspired art – with some mistakes! 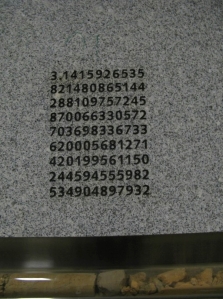 These aren’t really the digits of pi 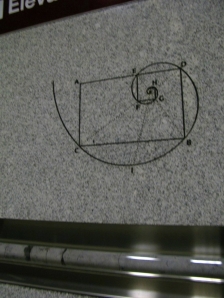 The golden spiral.  No obvious mistakes in this artwork, I just like it.

Near the elevators is a dedication plaque, as well as a plaque honoring William Robertson. 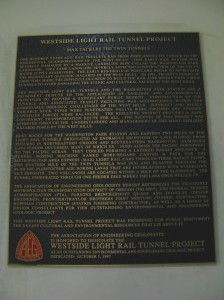 There’s also backlit art near the elevators on both sides.  I wonder about the backstory of some of it.  For example…

Is this supposed to sound like anything in particular?  I don’t think it’s written right.. EDIT – thank you to the commenter who identified it as the appropriate song “I’ve Been Working on the Railroad”

The upper one looks to be a “Dem Bones” reference, including the optional “connected to the trombone” verse.  The bottom I’m guessing is just a display of the various forms of the pentagon, and between that and some of the math art, I’m wondering if one of the artists who designed the work down here was inspired by Donald in Mathmagic Land.

And in the event of a fire, the eastbound and westbound platforms can be sealed off from each other.  There’s also an elaborate ventilation system in case of fire or other emergencies in the tunnel, preventing smoke inhalation deaths that have happened in other rail tunnel fires.

Won door on the eastern side

(if you need a trash can or want to buy a ticket, you’re going to have to – no ticket machines or garbage cans at the platform level.) 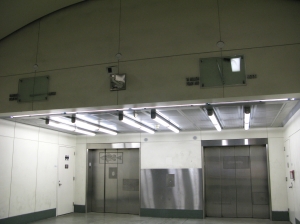 16 million years ago to the present 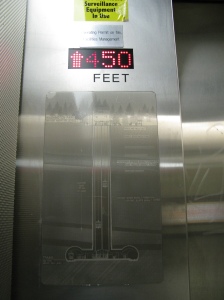 The elevators also make about as much noise as the trains do.

Once you get to the top…

The Zoo also gives you a discount on admission if you show your TriMet ticket when you go in.  Not a bad deal.

Don’t be a dumbass in the tunnel

Do not attempt to walk through the tunnels. You’ll either be hit by a train or arrested on charges of interfering with public transportation.

Don’t try to drive through the tunnels either.  Seriously.

If you’re going up to the zoo or Forestry Center, take the elevators.  That’s why they are there.  Do not take the stairs.  The stairs are not there for general public use, and I believe trying to open the door sets off an alarm (and it’s a looooong climb up anyway!)

Obviously, I’ve taken lots of photos in the tunnel, and so have many other people.  However, I’d once been informed (not while I was taking any pics and after I’d already taken dozens!) that technically you’re not allowed to take photos in the tunnel for homeland security reasons, etc.  All activity in the tunnel is monitored – there are cameras everywhere on the platform and motion detectors that go off if anything other than a train is in the bores. So what I’m getting at is that if you do go taking pics down there, there’s a possibility that a TriMet security person is going to show up and ask you what you’re up to. I’ve never seen this actually happen, but I sort of feel obligated to throw it out there that it could happen. 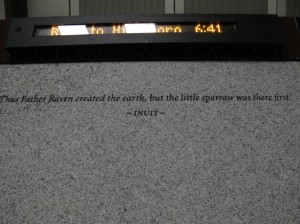