And for today, a definition.

Restricted speed for a MAX train is:

20 miles per hour or the posted speed (whichever is less)

but always at a speed that would allow the operator to stop within half their sight distance.

Situations in which restricted speed would be used include -but are not limited to- any time a train is running reverse traffic (e.g. east in the westbound tracks) or after bypassing a red ABS signal, or as directed to by Control.

EDIT – I’m updating this post with clarifications after being contacted via email which made me realize I’d worded some of this unclearly. Under normal operating conditions, something like a foggy night could get a warning from Control that you should operate at a speed that you feel comfortable and safe going at, which does not mean restricted speed – if the speed limit through a foggy area is 55 but you feel safe at 40 or 50, that’s fine. It is only when Control has stated that you should operate at restricted speed that the 1/2 sight distance restriction comes into play.

How fast do the trains go?

Question: How fast do the trains go?

Faster than the cars do during rush hour, at least.

The trains have a governor built in that brings the train to a smooth yet irretrievable stop if it goes above about 58mph (though some of the Type 1s are more like 60mph). This is called an overspeed and (thankfully) is not a rule violation since a lot of new operators overspeed by accident their first time going down a hill. 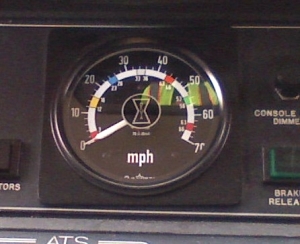 Speedometer of one of the low-floors, I think this was a Type 3.  Sorry for the reflection of my safety vest!

Yes, the rail alignment has speed limits, and yes, speeding is a rule violation.  Speed limits on the mainline range from 5mph to 55mph.  From fastest to slowest, here are examples of the speed limits in assorted areas of the mainline:

55mph on the Banfield

Many stretches in ABS territory have a speed limit of 55mph, which can be done since ABS territory is dedicated rail so there isn’t a worry about running with vehicle traffic.  In areas where there are curves, gated intersections, platforms, etc, the speed limit will be lower.

35mph is the maximum speed limit in pre-empt territory, found along most of Burnside. All of my Burnside pictures are too dark to be worth posting so I had to borrow this one.

Same as above – didn’t take this picture, borrowed from a rail operator’s blog

30mph is the maximum speed limit along Interstate.  The Yellow Line doesn’t pick up any appreciable speed until the Vanport Bridge, which is the only area of the Yellow Line alignment that is ABS territory.

Along Holladay in Portland and Washington St in Hillsboro (both pre-empt territory), the speed limit is 25mph.

Westbound out of the tunnel into Goose Hollow

Some of the hills have a speed limit of 20mph, like this part exiting the tunnel eastbound.  (Sorry about the bit in the video where it goes sideways!) 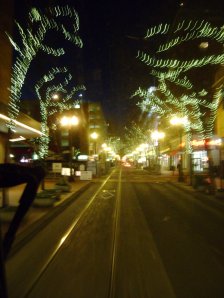 In the CBD (both the original Blue & Red line east/west alignment as well as the north/south Portland Mall alignment) the speed limit is 15mph on the straight sections of track.  Around some of the curves in this part of the alignment (Goose Hollow, PGE Park, Skidmore Fountain, 1st Ave, and that area up by Union Station), the speed limit will be 8mph or 10mph.

Remember when cars used to drive across the middle section of the bridge?

The Steel Bridge span – not the entire bridge, just the part that can be raised.  Even at that low speed you can feel a pretty large bump going over the bridge joints – the speed limit isn’t that low to protect the structural integrity of the bridge, but rather the vibrations created by going faster can damage the microswitches on the machinery on the bridge.  Getting up to the span and once the entire train is off, the speed limit is 15mph, same as the rest of the CBD.

Train on the bridge span, taken from the waterfront

The “fishhook” – that curve after Gateway that is used to diverge to the airport alignment is also 10 mph.

Over some switches, the speed is 5mph – you’ll see this entering or exiting Hatfield in Hillsboro, and also heading west into Rose Quarter. When the Yellow Line used to turn around at 11th Ave, the speed over those switches was also 5mph, as are the switches into and out of the Jackson turnaround by PSU. 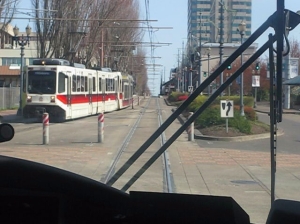 The train I’m in at the eastbound platform at Rose Quarter is stopped, but that train with the type 1 lead car is only going 5mph because of the switches into the westbound platform

The speed limit into platforms is 20mph or the posted speed, whichever is less.  The front of the train must be at that speed by the time it reaches the near end of the platform.  There are some platforms where the approach speed is slower (e.g. Rose Quarter westbound as previously mentioned because of the switches, Millikan Way westbound because of poor visibility, Gateway and Beaverton Transit Center because they’re so busy, etc) but most are 20mph.  An out-of-service train bypassing a platform will also slow to 20mph until it’s clear of the platform.